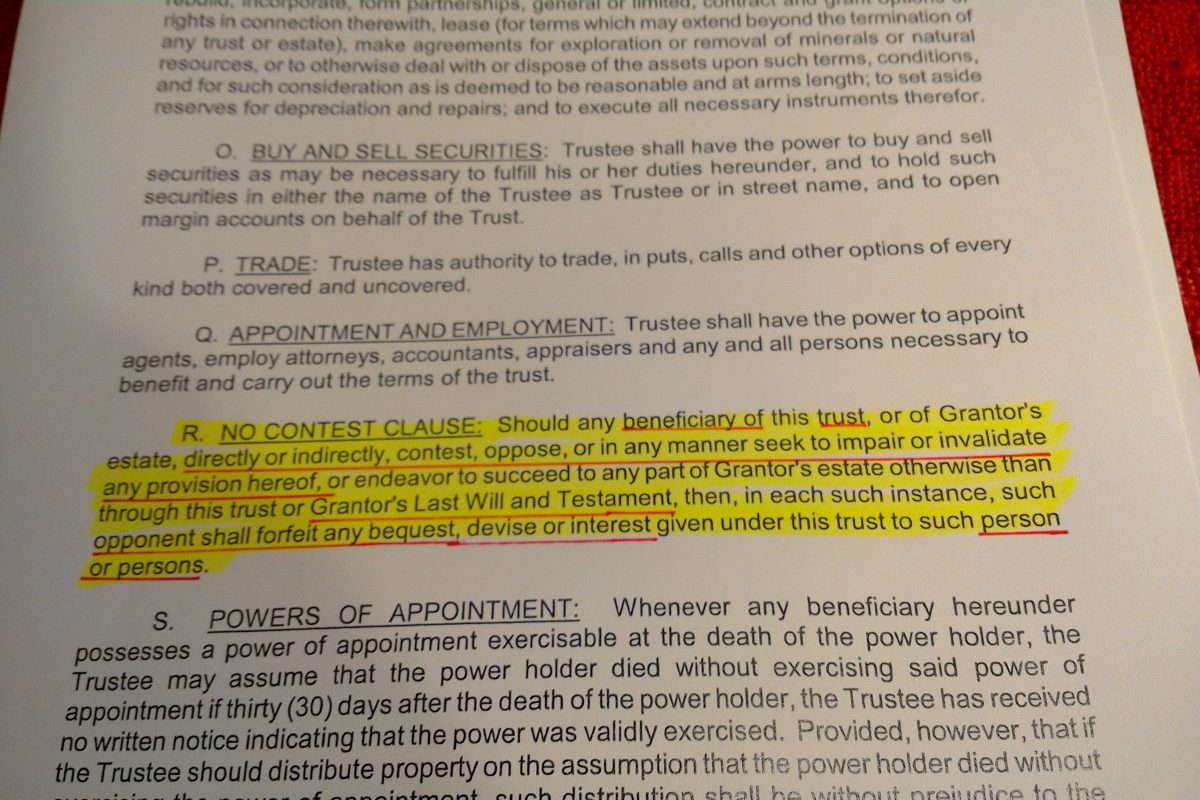 Isn’t this self explanatory that if a beneficiary, Trustee, and/or the Law Firm participated knowingly in the Screw You Father, Revenge Cremation Insult, totally against the Will instructions to be buried in a casket (see Common Sense and GoFundMe pages of this website) then they lose any inheritance (bequest) and/or interest (Authority to act for the Trust. Look it up in the dictionary.) given to them in the Trust. Literally all of the Trustees lost any inheritance, and interest which means their authority as a Trustee, as well as the Law Firm being 100% complicit with the Revenge Cremation Insult also lost they interest meaning any authority to act in behalf of the Grantor’s Trust. As I pointed out in the Probate Court the Law Firm did not have the authority to even file this law suit or did the Trustees. But that logic did NOT prevail in the Court Hearing.

There is a concept of “VALUE PRESENTATION” meaning what is presented during a sales presentation is good information and has value, especially if it is in writing. For example when buying a car from a dealer and the contract stipulates a bumper to bumper, 12 month, 12,000 mile, guarantee, the consumer has a “reasonable expectation” that if something goes wrong with the car within the warranted period the dealership is going to take care of the problem at the dealership’s expense, for the customer at the customer’s satisfaction, according to the terms of the warranty.

Is there any doubt this NO CONTEST CLAUSE would have been presented to my Dad as his embedded insurance policy, guarantee, that he was going to get his casket burial or the ones responsible for not giving him his casket burial will suffer the loss of their inheritance, the loss of their interest (Meaning authority to act for the Trust. Look it up in the dictionary.) in the Trust, period, no questions, no lame excuses, “no contest.”

The visitor to this website, put yourself in the position that this is your Will and Trust that you are about to sign. Even without the benefit of a lawyer explaining this NO CONTEST CLAUSE to you, with your good eye sight, when you read this, what would you have thought, about what you would have considered, as your “reasonable expectation” as to what would happen to anyone who violated your Will and Trust instructions? My Dad was virtually blind when he signed his Will and Trust, and the lawyers present would have had a fiduciary duty to properly explain this to him.

There is no doubt in my mind the S.M.P.B.S.B.F.S.L.s who were present, who explained my Dad’s Will and Trust to him, during the one hour or so explanation period to the Grantor the Trustee claims happened, explained to him to his satisfaction that this is an absolute guarantee he was going to get his casket burial, etc., just the way it is instructed in his Will and Trust or whoever is responsible for being his “opponent” will suffer the lose of their inheritance and the loss of any authority to act for the Trust.

Is there anyone, with an I.Q. higher than their age, that would think this NO CONTEST CLAUSE was explained to my Dad as not worth the paper it is written on? Does anyone think the S.M.P.B.S.B.F.S.L.s would have explained to my Dad, his chances of a casket funeral, a casket burial, were as good as a snow ball’s chances in hell? Of course not and that logic should have place in this whole discussion(s) and presentations pertaining to this, A POW Twice Mission for a Grantor’s and Beneficiary’s, Will and Trust, Bill of Rights.

Even if there was NO explaining this to my Dad, it doesn’t matter, it doesn’t make any difference, because this NO CONTEST CLAUSE guarantee and warranty is written into the Trust as final and finished business as of the day of signing. Ironically, my Dad could NOT have changed this insurance policy, even if he would have wanted to, except “only with the written consent of the Trustee.” How ironical is that? The NO CONTEST PROVISION CLAUSE that would turn against the Trustee could not be changed without her written consent.

When I presented this NO CONTEST CLAUSE, just like this explanation, in the Probate Court Hearing, the final Court Judgment read, “same are not supported by the evidence, not credible and are without legal basis or authority.” So what kind of Probate Law corruptions would have to be in place for this injustice to take place as a Court Judgment? Is this type of corruptions of the law in some way King George’s Revenge for our winning the American Revolution War? Strange things happen in this world.