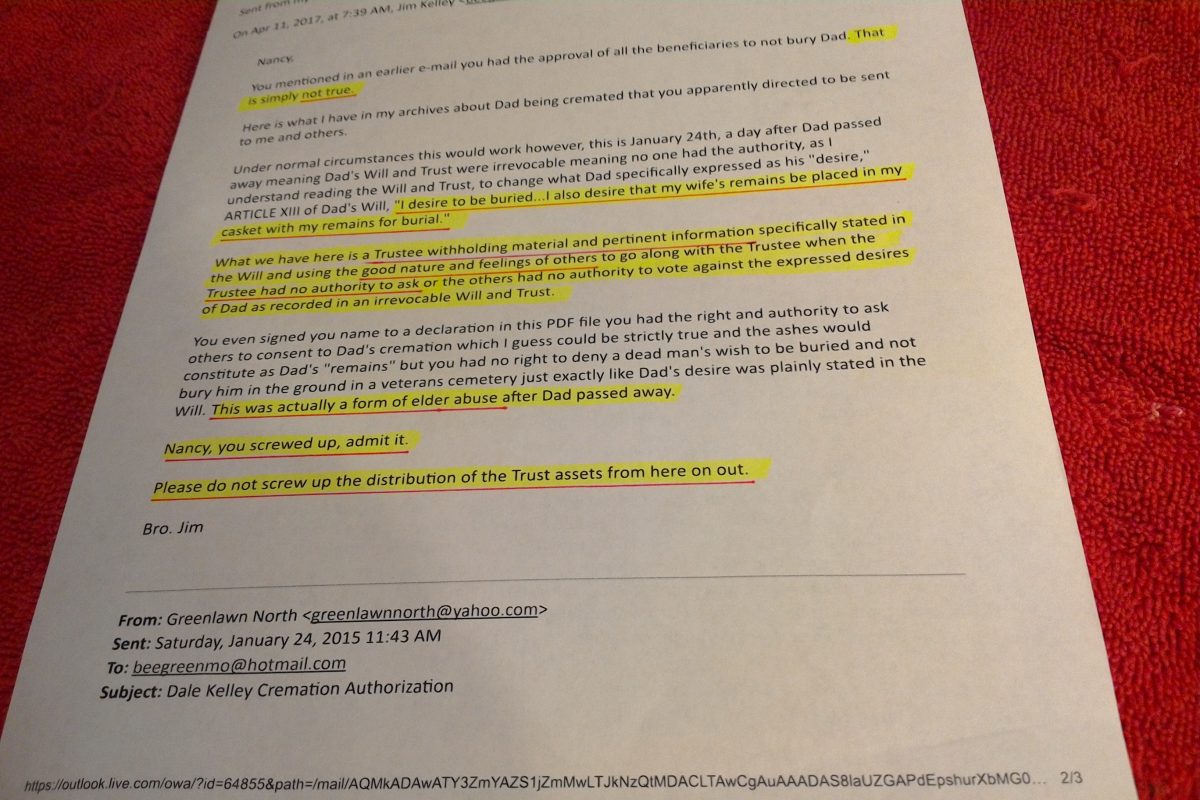 Correction Note: January 24, 2015, was the day my Dad passed away, not the day after as I stated in this e-mail. Also of note: I did not get a copy of the Will and Trust until March 31, 2017, over two years after my Dad’s death. This e-mail was 11 days after I received the Will and Trust, so I had a chance to ask Nancy some things and it became obvious that Nancy was lying to me about my inquiries. Also as can be observed there was an attachment going back to the day my Dad passed away and that attachment was the Authorization For Cremation certificate that Nancy desperately needed me to sign because the Funeral Home refused to honor Nancy’s Right of Sepulcher on Code of Ethics concerns for the Funeral Home.

This is a copy of the e-mail that Nancy used as an excuse to started it all against me. My confronting my sister, Nancy, that she lied to me on several occasions about her cremating my Dad and then just a plea, “Please do not screw up the distribution of the Trust assets from here on out.”

Normally that would be the end of it, the Trustee takes their deserved reprimand because they got caught, and then they go on with Trust business more carefully.

Nancy’s response to this e-mail, was first after her paragraph of self-serving cover her interests, when she would take this to court she planned from the beginning, false accusations against me about “contesting,” “bullying,” “threats an[d] intimidation,”  Nancy insulted every normal thinking person’s intelligence with, “The trust says nothing about burial. The will is not binding in that regard. What would you do now?…

“Just an FYI Maureen as contingent executor and trustee was given copies at the time of signing so we weren’t hiding anything …There is a reason wills and trusts are witnessed and notarized.”

After studying this out to make sure I was right, I contacted Nancy to advise her the Trust did mention burial as, “After Grantor’s death…Trustee…pay:…Grantor’s funeral and burial expenses, including…a grave marker and/or monument.” (Trust, Article II, A, (1), page 4)

Every bit of this was shown in court, this e-mail with my comments and Nancy’s response was my Exhibit C, and still the Judgment was against the Grantor, my Dad, Dale Kelley, insinuating that my Dad had no right to expect a casket burial, perhaps because Paul, the Trust Attorney, was not capable of writing a Will that was binding, or purposely wrote a Will that was not binding to facilitate the Screw You Father, Revenge Cremation Insult. I did present in the Hearing that is Paul was incapable of writing a Will that is binding, that was NOT my Dad’s fault or my fault.

Anyway, what started out to be my e-mail and plea, “Please…,” ended up to be a Blood Sucker lawyer harpoon in my heart to drag me into all sorts of unwanted, and unnecessarily, law suit actions, running up the costs to about $20,000, lying and misrepresenting in the Court Hearing, to get their way to have me pay for all of the rich Trustees’ and Law Firm (who was to incompetent to write a will that is binding for my Dad) legal fees and their salaries/pay. Who said bad work will cost the bad worker? In this case a set of S.M.P.B.S.B.F.S.L.s did bad work and then got more money defending their bad work!!!

It was clearly Nancy’s choice to start and to go on with the law suit, and she lied in the Court Hearing, to make it look like everything was my fault, and apparently the Judge bought it or at least according to Probate Law was bound to rule against me.

But one thing the Judge said that is a key element to this whole Case. When the S.M.P.B.S.B.F.S.L. Carl, my brother-in-law, approached the Bench to petition the Court to assign the excessive legal fees to me, the Judge asked, “Are you sure you want to do this?” And the Judge’s body language asked the same question.

Again, all I did was call Nancy on her lies to scheme to get her Screw You Dad, Revenge Cremation Insult, and her responses are all an insult to any reasonable thinking person, including a Blood Sucker lawyer harpoon to my heart law suits, complete with lies and deceptions.

Incidentally this is how these S.M.P.B.S.B.F.S.L.s treated my Dad before the “capture,” during the “capture,” during the POW detention period, and the Screw You Father, Revenge Cremation Insult, proving to me they are all out of control with pathological and narcissist tendencies that may prove to be full flown mental disorders if they were properly examined. For real, why would they, as a group, abuse my Dad and then abuse myself? For real, what did we do to deserve them ruining our lives when they touched our lives with their S.M.P.B.S.B.F.S.L. tactics?

My Dad suffered as a POW the last useful year of his life, without his life long friends and unable to spend his own money, and unable to change anything in his own Will and Revocable Trust, without “the written consent of the Trustee” which was Commandant Nancy.

Now these S.M.P.B.S.B.F.S.L.s want to bankrupt me. My financial circumstances are so tight it is often that I buy groceries on my credit card because I am cash poor that week, so how in the heck can I have the money to pay the riches’ legal expenses, especially considering I could not afford to pay fora lawyer to represent me? I have no choice but to rely on charity gifts to pay for this and that will take some informing the public of the circumstances so they will know the whys.

Is this not some kind of reverse Robin Hood Theme; steal from the poor to give to rich?

Obviously so. Where were these S.M.P.B.S.B.F.S.L.s when Robin Hood was on TV? Perhaps they were roaming their neighborhoods looking for the weak to take their “chump change?” if they did watch Robin Hood, the Theme sure did not stick with their conscience or calibrate their moral compass.

P.S. As with most abuses, the longer and more sever the abuses by abusers, the more time the abused have to gather their thoughts, receive revelations from God as to the correct principles, and the more involved and sure the defenses of the abused are for those who give a rat’s rear end.

The Battle of Concord and Lexington was referred to in history as “the shot heard around the world!”

I suppose this A POW Mission for a Grantor’s and Beneficiary’s, Will and Trust, Bill of Rights, may at some future time, be mentioned in  history, as the time that the  point of a  wooden stake was driven into the hearts of the Blood Sucker lawyers who so freely operate everywhere?