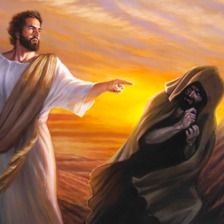 When speaking of “Christian soldiers,” then “who are you?”

How many Christian soldiers have fought on so many battle fronts as I have and realized it? And realized it is important because when fighting against Satan, and his invisible spirit demon world, most people don’t have a clue what is happening let alone that they are involved in a battle or war.

My Dad fought in WW II, was there on D-Day in the skies flying two bombing missions that D-Day in direct support of the D-Day invasion, and then was a direct victim of the 21st Century War Of Elder Abuses probably knowing later, to late, that he had been lawyer tricked into signing his Unconditional Surrender Will And Trust, at the hands and direction of his own Nazi Lawyer Daughter, in “a den of thieves” Law Firm conference room.

Because Satan, and his demon faithful followers, are invisible to the human eye spirit beings, roaming and walking this earth, there are only a very few people who have actually seen them. There are a lot more who have heard their audible voice(s) [me included] and most people have felt their influence most not even knowing where that satanic influence came from.

So this is the scene of the wars and the battles for the children of God for the Eternal Reward of Heaven with God or a hell not in the presence of God. These are the stakes, Heaven or hell, and there are no greater stakes in the whole wide world. “For what shall it profit a man, if he shall gain the whole world, and lose his own soul?” Mark. 8:36.

I tried to upload the Mormon Tabernacle Choir but I couldn’t. Perhaps they have blocked my website. This is a good rendition however, when the closed caption [CC] is in use they use “king” as in a small “k” instead of with a capital “K” which I prefer when speaking of Jesus as our King. Other than that this is pretty darn good!  🙂

[To be continued soon]