This Honor Roll Page is intended to illustrate to the Politician, and the citizen who may contact their Politician, who the Friends are for a Grantor and Beneficiary, Will and Trust, Bill of Rights.

As people make significant contributions to this Cause their names shall be noted here.

Also note that those who contribute through gofundme will appear on Page 47, gofundme, for a list of persons who donated, and are friends of this Mission, right there. The gofundme page have been deactivated.

First is The Honorable Josh Hawley, former Missouri Attorney General, current U.S. Senator, who as the A.G. initiated an investigation to determine wrong doings involving the Unconditional Surrender Will and Trust, in June, 2017, early on.

If the Honorable A.G. would have had his way this whole situation would have been resolved in favor of my Dad (Grantor of the Will and Trust) by an impartial third party government agency. The Nazi Lawyer/Trustee Nancy Yendes stopped any A.G. investigation with a little known State Law that the A.G. can NOT investigate a family Will and Trust where the Trustee is a family member that is NOT paid.

Actually, with the exception of the four supporting persons listed above as on gofundme, it would seem that the only persons who have stood up for my Dad in all of this, “with manly firmness” like our Founding Fathers, was the Honorable Joshua Hawley and myself. This gives me cause to believe that the Honorable U.S. Senator Hawley, and myself, if we lived in the time of the American Revolutionary War would have been the Blue Coats on the side of the Colonies; and all of the others that have fought against my Dad, or even just kept silent when they were adequately alerted on this A POW Twice Mission, would have been the Nazi Red Coat kind who would have stayed loyal to the tyrant King George of England at that same time. This is a sobering thought to consider, which cloth are you cut from, a Founding Father Patriot cloth or a Benedict Arnold Nazi Red Coat Traitor cloth?

Here is a letter full of revelations damaging to the Nazi Trustee/Lawyer Nancy that she sent to the Honorable A.G. Hawley:

I will go over the revelations that Nazi Nancy self-imposed on herself as incriminating evidence against herself, she obviously thinking that she was “covering her ass” (CYA), for later.

First of all, may I point out, may I ask, WHAT KIND OF A MENTAL NUT JOB MO. STATE LEGISLATOR PASSED A LAW THAT FORBID THE STATE ATTORNEY GENERAL FROM INVESTIGATING A FAMILY WILL AND TRUST WHERE THE TRUSTEE IS A FAMILY MEMBER WITHOUT FEE??? This is the same as claiming that the State Legislator is OK with family members screwing each other over without the normal government oversight afforded to everyone else. Again, what kind of mental nut jobs passed this kind of a law? Answer: the same kind of mental nut job Mo. State Legislators that passed a Right of Sepulcher law that would give a mental nut job narcissist holding that Right of Sepulcher the authority to go against the will of a Grantor of a Will and Trust their unalienable Rights to specify a casket funeral and a casket burial, when they as a “paying client” of a Law Firm had a state licensed lawyer put that in their Will and Trust with enough money set aside to pay for it!!! THAT IS NAZISM IN THE STATE CAPITAL!!!

OK, here we go with the Nazi Nancy Yendes self-incriminating statements and evidences:

Notice in paragraph two Nancy alludes, without actually claiming that this describes her, that the A.G. has no authority to investigate a family member Trustee who serves “without fee.” Nancy’s wording is very important here and is so typically shyster lawyer. She claims that she did NOT receive any fee when she actually did.

Nancy Yendes did receive payment of something of value when she led my Dad to the “den of thieves” Law Firm as a referral. #1 payment was the transfer of my Dad’s Rights to change his own Trust, decide where he was to live, and how he would spend his own money. #2 payment was Nancy being named the Trustee at the start when it would have been more proper for the Grantor, my Dad, to have retained the position of Trustee of his own Trust until he was considered incompetent and/or incapacitated. 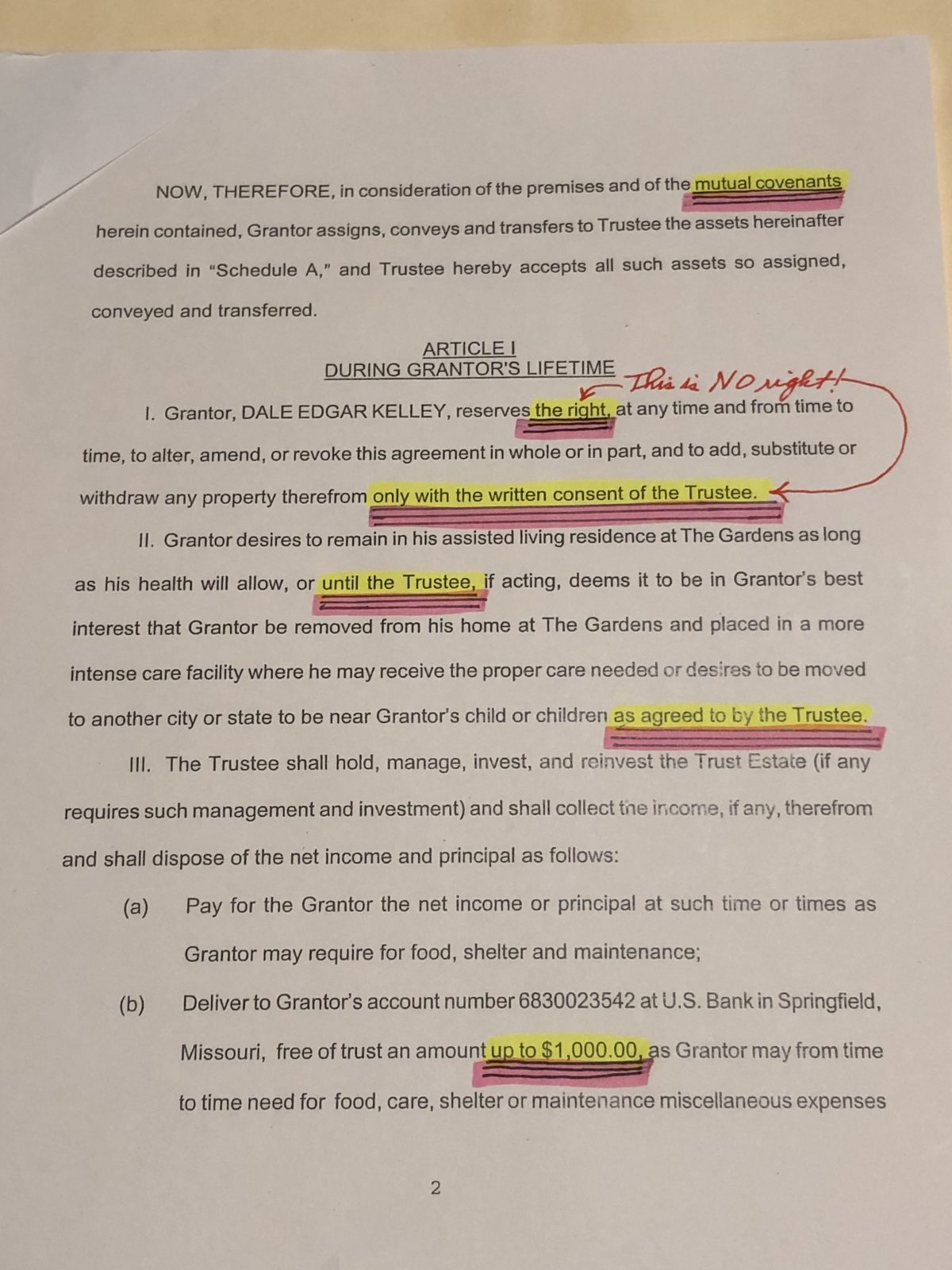 This is page 2 of my Dad’s Trust. Who retains all of the rights? The Trustee which was the Nazi Lawyer/Trustee Nancy Yendes, the vendictive daughter of Dale Kelley who was the Grantor.

So here is the Mo. BAR giving legal advise, which they will not stand behind, that it is not only desirable but it is ordinary procedure that the Grantor should “serve initially as trustee.” So what happened with that? Obviously this is the kinds of thefts a “paying client” can expect when they are led as a sheep to “a den of thieves” Law Firm.

The new Mo. Attorney General has been notified of these fee payments for Trustee Nancy and time will tell if the new Attorney General is capable of finishing the good work against Nazism that Josh Hawley started?

Eric S. Schmitt, is there any law against making a FALSE STATEMENT to the Attorney General’s Office to avoid an investigation? In this Case Nazi Nancy knew that she was paid her Dad’s unalienable Rights, and total control of Dad’s money, for her pay to refer Dale Kelley to the “den of thieves” Law Firm so that she would be named the Trustee at first, from the very start, instead of Dale Kelley retaining his own Trusteeship. So Nazi Nancy’s pay/fee was the transfer of unalienable Rights, total control of the money, and being the Trustee unethically, for being the Trustee. This payback for a referral was a direct violation of the Mo. BAR code of ethics, Missouri Rules Of Professional Conduct, too!

While we are here we may as well address the bold, and prideful, declaration of Trustee Nancy that she claims “the right to decide what to do with my Dad’s remains.” Now take a look at what Trustee Nancy agreed to as the Trustee pertaining to her “Dad’s” instructions to be buried in a casket? 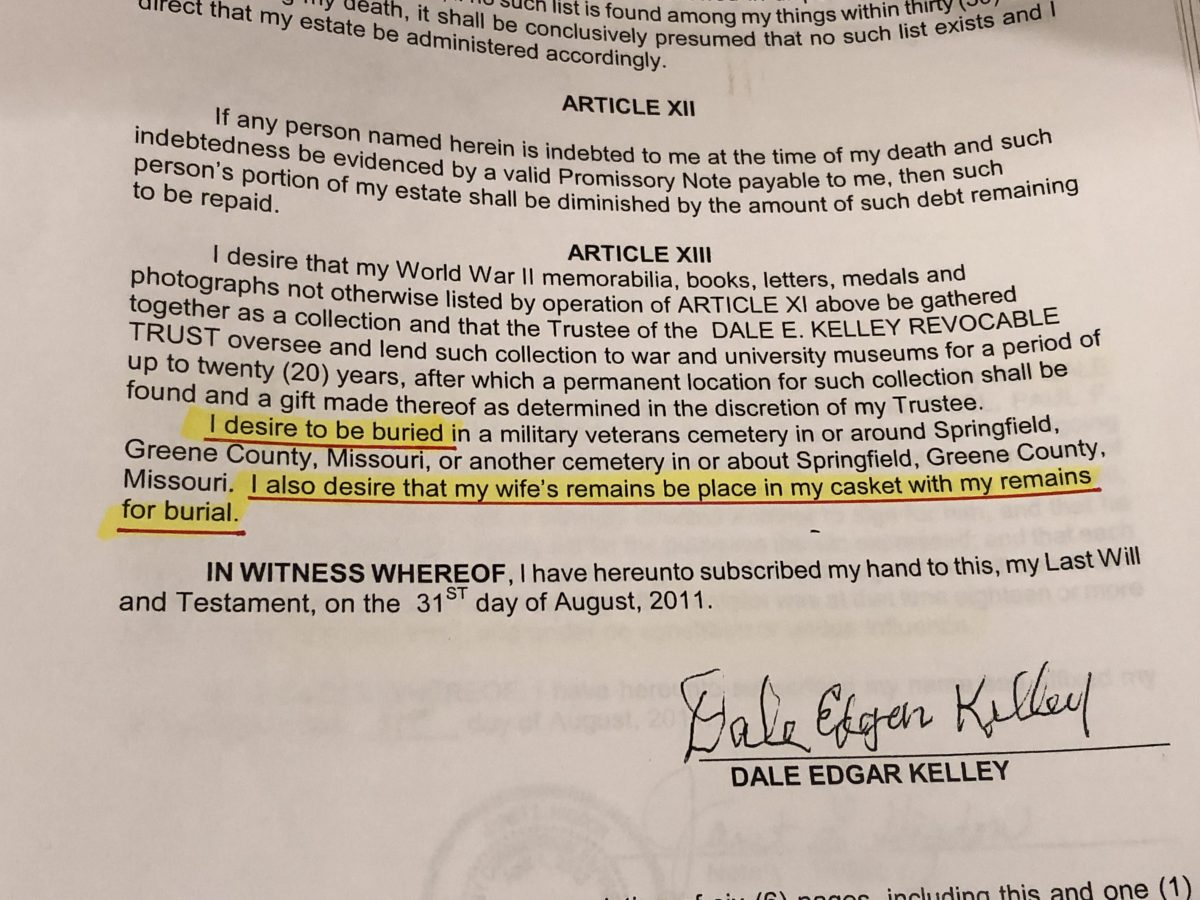 As anyone can plainly see that as the Trustee, Nazi Nancy had to have agreed to follow all of the Grantor’s instructions or why else would she have ever been made a Trustee [trust-ee, see the word trust]? With Nazis like Nancy Yendes, and the Nazi “den of thieves” Law Firm, who needs enemies?

I pray that the new Mo. Attorney General is only 1/2 of the man of integrity that the Honorable Joshua Hawley is.

U.S. Senator Josh Hawley  was the ONLY Missouri politician who stood up for my Dad and myself in this Unconditional Surrender Will and Trust nightmare and I think that that speaks volumes for his Christian values and ethical integrity as a true servant of the people.