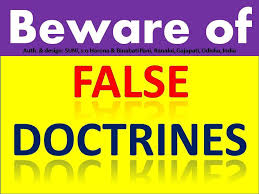 There are a lot of people, including the clergy, who are most probably well meaning in their heart felt teachings of religion, but are NOT keeping with the Holy Scriptures and are, plain and simple, teaching False Doctrines pertaining to the Gospel of Jesus Christ. It is probably time that I address some of this for the benefit and the good of America.

Some of what I present here, as false doctrines taught by many of the clergy, will be a hard pill for many to swallow because many Christians have such faith in their clergy and the clergy can be very convincing when teaching false doctrines, especially when they believe in their hearts what they are teaching is true, even though the Bible says differently as the exact opposite. So it is important for a Christian to put their faith in the Bible instead of any “arm of flesh” when there is a discrepancy.

“A Bible! A Bible! We have got a Bible, and there cannot be any more Bible.” (2 Nephi 29:3, of the Ancient American Indian Scriptures also named the Book of Mormon.)

First of all, the Holy Bible does NOT say anywhere there cannot be any more God inspired, legitimate, scriptures, given to the inhabitants of this earth, by God through His Holy Prophets in the last days. Satan is the author of that lie that God is bound somehow NOT to be able to give more of His Word to his people in the latter-days. Satan’s personal lie on this matter is so easily disproven it is actually child’s play to do so.  🙂

Apparently days after the Book of Mormon (Ancient American Indian Scriptures) was published in 1830, there were some Christian minister who discovered Revelation 22:18-19 and started to proclaim the false doctrine that that scripture proves the Book of Mormon false because nothing can be added to the Holy Bible as Christians received it after it was canonized by the Church which evolved as the Roman Catholic (meaning universal) Church and the Eastern Greek Orthodox Church.

Then add to this that John wrote his Gospel According To St. John many years after he wrote Revelation, then one has to ask, if additional scriptures are forbidden after the writing of Revelation then why would John violate a Warning from God that he himself penned earlier?

Actually, there is a similar warning that Moses wrote in Deuteronomy 4:2, “Ye shall not add unto the word which I command you, neither shall ye diminish ought from it.” At times a true Prophet of God will warn the reader not to tamper with what God caused to be written, no more and no less.

So for any minister of the clergy to claim that Revelation 22:18-19 has anything to do with any claim that there can be no more legitimate scripture given to the people of the earth from God is just plain poor scholarship at the best and proves that they can be tricked by Satan at the worst.

Third: Here is the ACID TEST for what Revelation 22:18-19 really means. In Revelation 14:6 we read, “And I saw another angel fly in the mist of heaven, having the everlasting gospel to preach unto them that dwell on the earth, and to every nation, and kindred, and tongue, and people.” Does that sound like that angel had in his possession the Bible?

The Bible has never claimed to have been delivered to the people by an angel from heaven. The Bible claims to have been written by living Prophets of God and preserved by the Churches for posterity.

So this is what the Revelation 22:18-19 Warning means in the case of Revelation 14:6. IF ANYONE WERE TO DENY THE POSSIBILITY OF A SECOND SET OF SCRIPTURES BEING DELIVERED TO THE INHABITANTS OF THIS EARTH BY AN ANGEL FROM HEAVEN THEN THEY WOULD BE ADDING TO AND TAKING AWAY FROM THE REVELATION 14:6 PROPHECY AND GOD SHALL TAKE THEIR NAME OUT OF THE BOOK OF LIFE. That is it, sweet (bitter to some) and simple.

Forth: Actually there are other Bible verses that fortell other scripture coming forth that are not the Bible.

Isaiah 29:11, “And the vision of all is become unto you as the words of a book [there is that word “book” again] that is sealed…” The Bible has no claims that it is a sealed book BUT the Book of Mormon does. “Written and sealed up…Sealed by the  hand of Moroni…” Title Page of the Book of Mormon.

The Bible was written by the Jews and in the Book of Mormon there is an account that it was written by direct desendents of Joseph, “even that Joseph who was the son of Jacob, who was sold into Egypt.” 1 Nephi 5:14.

Fifth: It is like three strikes and you are out for anyone trying to claim that “the Book of Mormon is [not] true.”

Strike One: The Gold Plates which the Book of Mormon was translated from was delivered to Joseph Smith by the Angel from heaven Moroni.

Strike Two: The Book of Mormon is a sealed book.

So as we can plainly see by this illustration, the many Christian ministers can be as wrong as wrong can be about what some of the things that they teach contained in the Bible and about the Bible.

Unfortunately for the Mormons the Book of Mormon foretells that they would fall into aposticy because their Church General Authority leader “hypocrites” would end up polluting “the holy church of God,” meaning according to Mormon Doctrine the Mormon Church. Of course being the “hypocrites” (Jesus’ Word, not mine) the Mormon Church claims this warning from Jesus Christ Personally (Mormon 8:38) does not apply to the Mormon Church. This is “child’s play” to disprove what the lying Mormon Church leadership says and a good commentary can be found on yblds.com and mormon8-38.com.

The Mormon Church used to be a great Church but it fell into the traps of Satan. “So sad.”  🙁

Is it not intereswting that since 1830 many Christians wore out their lives trying to find that one shred of evidence that the Mormon Church was an apostate Church and all along all of the evidence that anyone would have needed was right in the Book of Mormon. So “the Book of Mormon is true” and should be revered as much as legitimate holy scripture as the Bible is.

Anyone who would want a free copy of the Book of Mormon only has to ask the Mormon Church for one and they will give you one. Just look up Church of Jesus Christ of Latter-day Saints in the phone book or do an Internet search for a church location near you and just ask, AND DON’T BE BASHFUL ABOUT ASKING EITHER!!! Make sure that you study up at yblds.com before the Mormons deliver your Book of Mormon so you can ask them about the Mormon 8:38 verse and just be quiet and listen. “Very interesting.”

To be finished, as ongoing needs for religion lessons evolve, later.  🙂