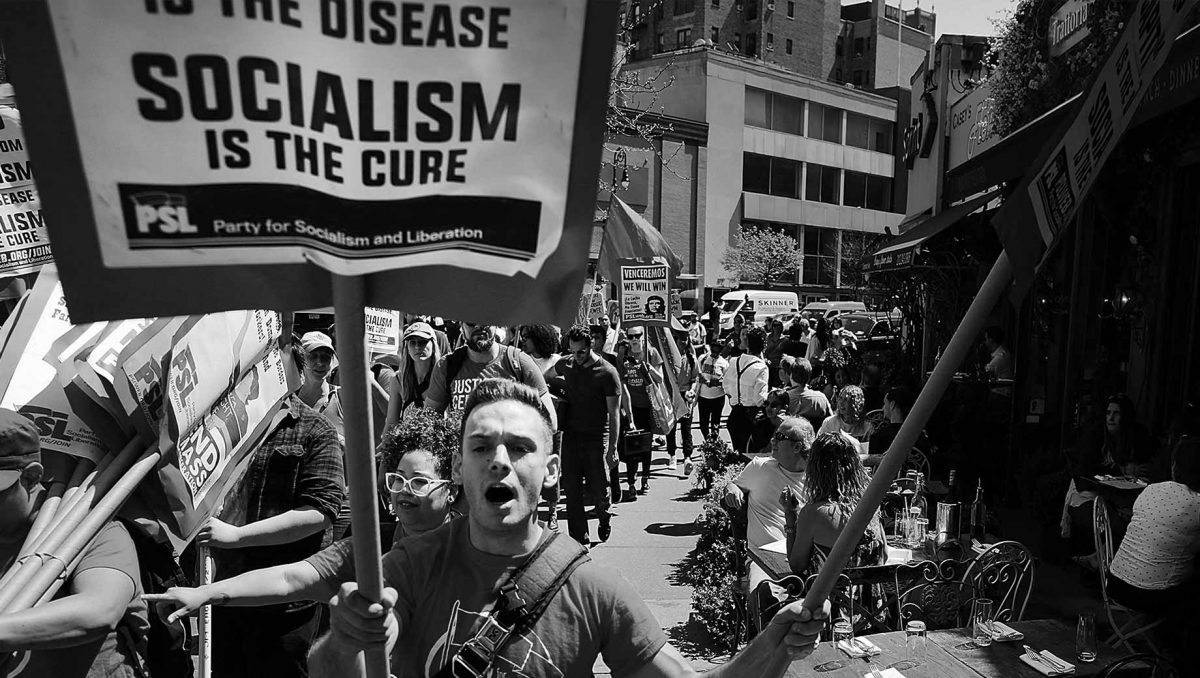 This picture is typical of most college student protests/demonstrations in 21st Century America. Notice the sign which states, “Party for Socialism…” The Socialists don’t even try to hide that they are Socialists any more.

The first time I had ever heard that there was a Student Loan Program was in 1969 and it actually shocked me that there could even be such a thing because it was understood in America before that that if you wanted to go to college you either had the money to pay for it (G.I. Bill, personal savings, parents, employer, etc.) or you worked your way through college. Many a story were around how the great men of the past worked a job nights to support themselves going to college during the daytime. Often young men would work construction during the good times as labors to save up enough money to pay for another semester or two of college and that is how most people went to college in addition to scholarships if you could qualify like playing foot ball real well.

These doesn’t seem to by any qualifications to get a student loan including any indications for any ability to pay it back. There are senior citizens in their 60s, on welfare, toting an oxygen bottle behind them on wheels, who have just enough strength in their hand to sign the student loan application that was the only thing get them a student loan. The Student Loan Program is a type of higher education insanity or is it?

The Nuts and Bolts

First of all, the Student Loan Program is a Gold Mine for the colleges and universities which has been the money stream for most of their growth and prosperity in the last 50 years (1970 to 2020). Find out what part of a college’s income comes from student loans and you then know why colleges encourage student loans. Incidently, before WW II the cost of a college education was about 1/2 of what it became right after WW II with the G.I. Bill paying the way for most college educations then. After the Student Loan Program starting in the 1960s the costs of college just keep going up and up. Every time the Federal Government gets involved with anything the price just goes up and often the quality goes down. Obama Care is a perfect example of this.

Second, the Student Loan Program is guaranteed money backed by the Federal Government so this is a sure thing for the colleges. Even if the student never pays back one cent of the student loan the college has already gotten their money up front.

Third, there are a lot of student loans that are paid back but the ones that are not paid back represent a huge part of the unpaid personal debt in America. Unpaid student loans have become such a big problem that Congress has passed special laws to try to control the losses like bankruptcy does NOT affect a student loan, this is how severe the nonpayment of student loans has become. When you make loans to peole unable to pay the loan back what would you expect? And the colleges are right there encouraging every “warm body” that comes through the door to sign up for a student loan. They may as well have an entrance exam: can you smell shit, see lighting, and hear thunder? But then that exam/test may disqualify some who are getting student loans now. “Bad idea!”

First of all, the Student Loan Programs are the most attractive to the poor and the most not credit worthy people in our Society. The well off and credit worthy people do not need any student loans however, they do often participate in the Student Loan Programs because of their ease to participate and the introductory interest rates are attractive.

Second, the poor and most not credit worth people are the reasons for the Student Loan Programs for these reasons. A. It is to get these poor and ignorant people into college so that they can be brainwashed with the philosophies of Socialism and Communism. B. The Student Loan Programs effectively and efficiently herd up the most poor and ignorant of Society through a gate into the corral of the colleges which are the school masters for Socialism and Communism. C. It makes no difference if the Student Loan Programs are a bankrupt program because the huge unpaid debt that this creates only adds to the National Debt. D. The higher the National Debt the weaker America is and the more likely the people will vote in Socialism and Communism. E. The Socialist and Communist politicians often promise relief from student loan debt with their forgiveness programs for a problem that their Party created in the first place by offering government backed student loans to people that anyone should have known were NOT credit worthy, likely not capable of finishing college, probably not capable of keeping a job to make the money to pay back any loan, and would be the most likely to never pay back any debt. This is a win-win for the Socialists and Communists; a golden opportunity to teach their Socialism and Communism to a captive audience and run up the National Debt at the same time. Perfect!

Third, and this is the most important element of this Student Loan Program Page. While the American Socialists and Communists think that they are the ones that will benefit the most with the herd brainwashing of the most poor and most ignorant of American in the ways of Socialism and Communism, the reality is the Islamic Muslims are going to take away all of the American Socialists and Communists marbles in the near future. All of this college and university brainwashing of the masses in America, encompassing the rich and the poor because of the Student Loan Program, the way have been paved, the field is ripe, for the masses to accept Islam with Sharia Law as the future of America because the masses have been taught that American Capitalism has failed in spite of the evidence that American Capitalism is the best friend the poor people have.

So this is exactly why the American Nazi Lawyer/judge Mafia “Secret Combinations” Secret Society Shadow Governments not only survives in American, but thrives, because the people have been brainwashed onto not being able to think for themselves, but have been taught what to think, and that thinking process is Socialism and Communism; which the Islamic Muslims will take advantage of and use to take over America in the very near future.