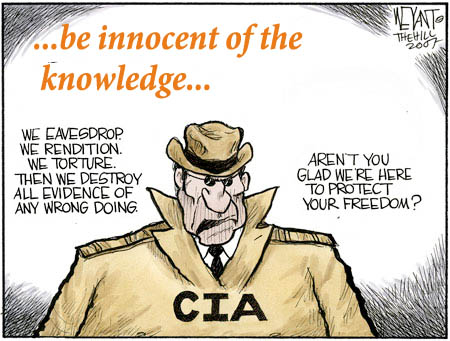 Plausible Deniability is the ability to separate ones self from the crime.

But what happens when the criminals are open and notorious? Then we have Plausible Accountability!

The millions upon millions of fraudulent votes in the 2020 Presidential Election is perhaps the biggest fraud ever perpetrated upon the American people as well as the world. How in the world could the midget candidate “Sleepy Joe” Biden ever beat the mucho grande candidate incumbent President Donald J. Trump? When President Trump was attracting hundreds of thousands of supporters in one day at his rallies “Sleepy Joe” was attracting a few dozen people and flies. What is pictured above is the direct result of perhaps 30 million well placed fraudulent votes for B.I.D.E.N. = biggest idiot Democrats ever nominated. Every honest Democrat should be totally embarrassed and outraged over this, all two of them!

Every honest lawyer and judge should be totally embarrassed and outraged over this, all two of them [and I have hoped that there would be more than two of you and you honest ones will come forward and stand up for “Truth, Justice, and the American Way” as represented in the Pledge of Allegiance to the Flag which most every American has taken several times if not hundreds of times]!

[To be finished later with a list of the names of those who are Plausibly Accountable. This will NOT be pretty especially for the Northside [pretend] Christian [christemporoi] Church of Springfield, Mo.]

The #33., Northside Christian Church Page on this website will supply a lot of revelations pertaining to the high level of Plausible Accountability that would apply to the Northside Church.

The Spirit of God impressed upon me to write and send this letter to the Lead Minister Wayne Bushnell which a photo copy of that letter is given here: 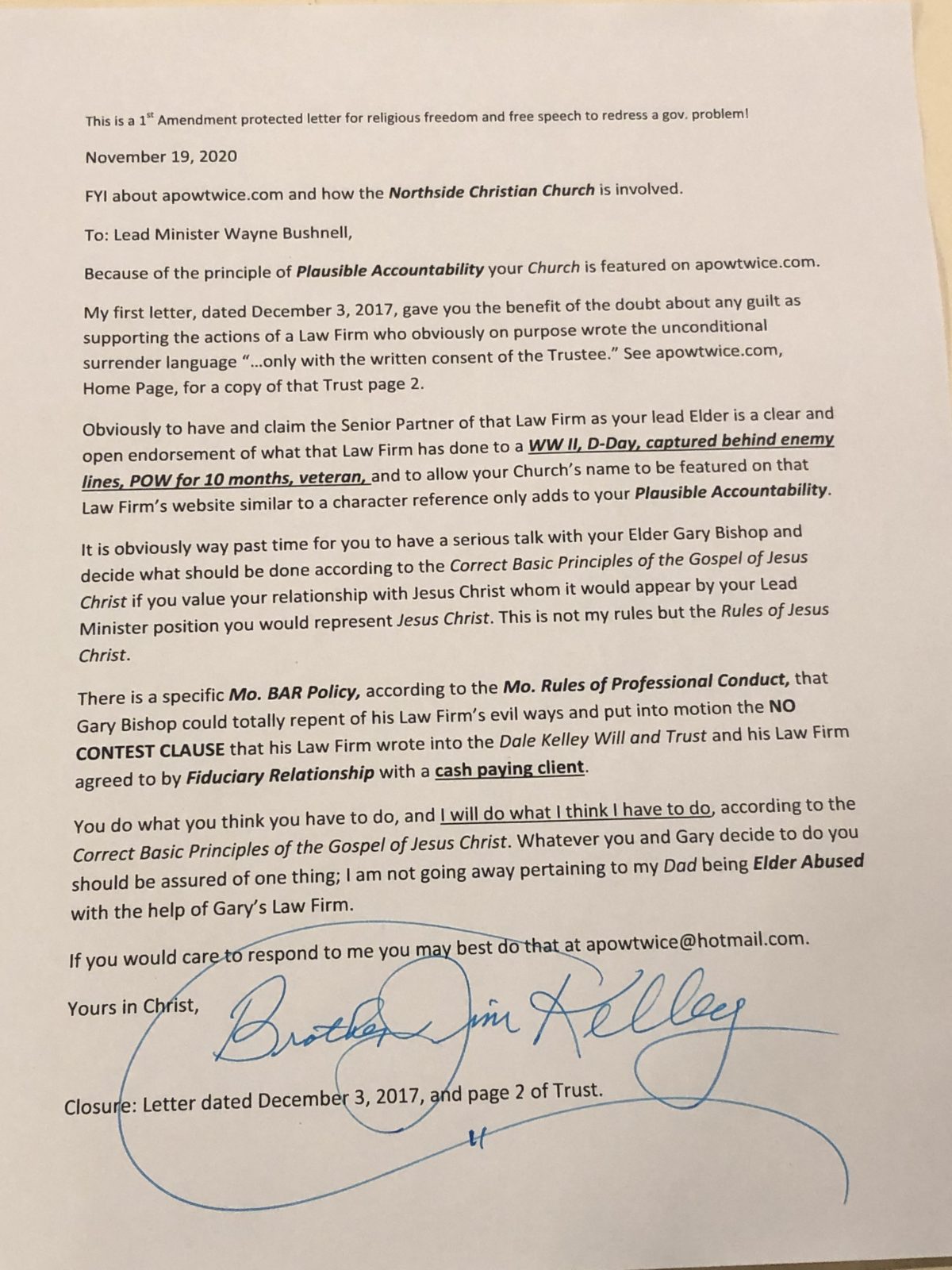 The Gospel Principles in play here as recorded in Matthew Chapter 25 are:

31 When the Son of man shall come in his glory, and all the holy angels with him, then shall he sit upon the throne of his glory:

32 And before him shall be gathered all nations: and he shall separate them one from another, as a shepherd divideth his sheep from the goats:

33 And he shall set the sheep on his right hand, but the goats on the left.

34 Then shall the King say unto them on his right hand, Come, ye blessed of my Father, inherit the kingdom prepared for you from the foundation of the world:

37 Then shall the righteous answer him, saying, Lord, when saw we thee an hungred, and fed thee? or thirsty, and gave thee drink?

38 When saw we thee a stranger, and took thee in? or naked, and clothed thee?

39 Or when saw we thee sick, or in prison, and came unto thee?

41 Then shall he say also unto them on the left hand, Depart from me, ye cursed, into everlasting fire, prepared for the devil and his angels:

43 I was a stranger, and ye took me not in: naked, and ye clothed me not: sick, and in prison, and ye visited me not.

44 Then shall they also answer him, saying, Lord, when saw we thee an hungred, or athirst, or a stranger, or naked, or sick, or in prison, and did not minister unto thee?

46 And these shall go away into everlasting punishment: but the righteous into life eternal.

So when the Lead Minister Wayne Bushnell of the Northside (pretend) Christian (christemporoi) Church of Springfield openly, and notoriously, supports “a den of thieves” Nazi, anti-veteran, Law Firm, over a period of three years (giving them more than enough time to discern the truth) then they are as Plausible Accountable as those American Nazi Lawyers that they supported similar to the driver of the get away car of a bank robbery is as guilty as the robbers who entered the bank and killed someone. So the question that begs to be asked here is WHY WOULD ANY MINISTER GIVE ANY AID AND COMFORT TO ANY NAZI??? Also, why would anyone attend such a church led by a minister who supports Nazis and also supports anti-veteran activities in this case specifically against a D-Day veteran???

Is there any doubt where Nazis and Nazi supporters will be on Judgment Day? Answer, in case you don’t know, on their way to a one way ticket “burning in hell” trip at the direction of Jesus Christ perhaps at “the first second, of the first minute, of the first hour, of the Lord’s Work on Judgment Day.”

Lead Minister Wayne Bushnell, why do you think that you are not in jeopardy of losing your eternal life with Jesus Christ for supporting American Lawyer Nazism and why do you think anyone should follow you as a representative of Jesus Christ? You may give me your answer at apowtwice@hotmail.com. I would really like to hear what you have to say about this!

On April 9, 1945, Lutheran pastor and theologian Dietrich Bonhoeffer is hanged at Flossenburg, only days before the American liberation of the POW camp. The last words of the brilliant and courageous 39-year-old opponent of Nazism were “This is the end—for me, the beginning of life.” This was a hurry-up hanging because the Nazis knew that if they did not hang this true disciple of Jesus Christ in a hurry then the enemies of Nazism would have liberated him very soon. The hanging of Pasture Dietrich Bonhoeffer was as cold and calculated as when the Nazi Lawyers captured a WW II, D-Day veteran, and lawyer tricked him into signing his own Unconditional Surrender when he was 94 years old and blind.

I really do not understand the glue that welds Nazi Gary Bishop and Nazi supporter Lead Minister Wayne Bushnell together. Are they brother-in-laws, are they homosexual lovers in the closet, or what??? My observations of people who openly, and notoriously, oppose Jesus Christ is that they have something very sinister in their lives that causes that opposition against God, so the homosexual possibility is not out of the question but a very real possibility. If either one of these pathetic “males” wants to deny that they are practicing homosexuals then they can e-mail me at apowtwice@hotmail.com, denying that and I will post their comment right here.

This space reserved for Gary’s and/or Wayne’s comments.

Remember, silence is a form of speech too!

And NOT one peep from the satanic cowards “Lead Minister Wayne Bushnell” and the Northside [pretend] Christian Church of Springfield, Mo., “Elder” Gary Bishop. Cowards hide and quake when the Word of God becomes a testimony against them, just like Satan himself hides and quakes when Jesus Christ ordered him to retreat, and stand silent! So this space still continues to be left void of any coward’s comments!