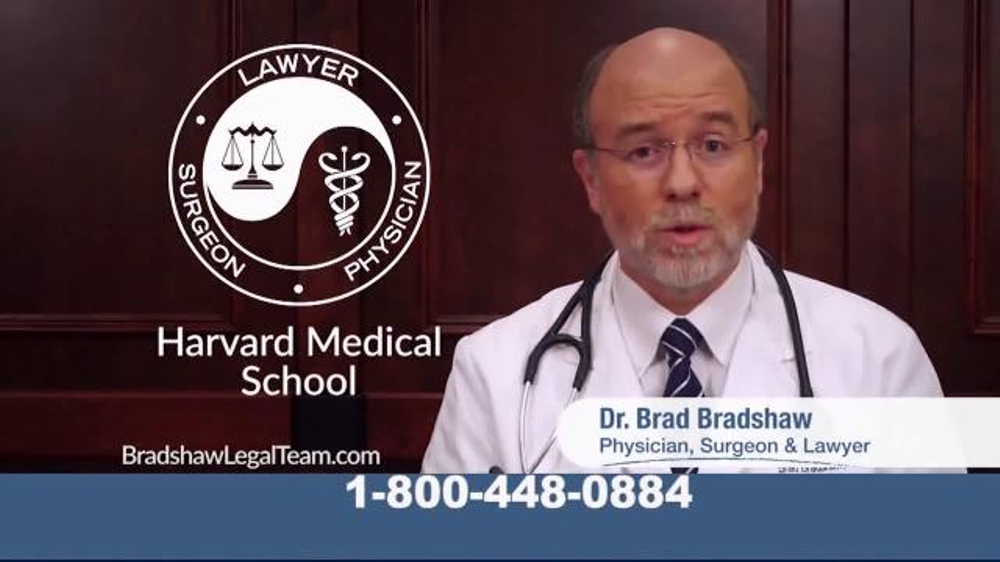 Is there any doubt in the mind of a reasonable thinking person that God would want harmony to exist with the professional practices of the  Lawyer/Judge Profession and the Correct Principles of Honesty as taught by the Gospel of Jesus Christ?

One example of how fluid the Lawyer/Judge Professional Ethics are, it used to be considered UNETHICAL for a lawyer to advertiser in any form whatsoever. As I remember that changed in about 1975, and that caused no small stir among the people, and now the “big money” lawyers consume huge portions of prime time advertising space on TV. Above is a screen shot of such a “big money” lawyer who obviously claims to be a medical doctor and surgeon but uses his time practicing law as a lawyer. Is this screen shot not a perfect example of how the American Nazi Lawyer/Judge Mafia would be a more profitable “big money” business suing people than the medical field is with their business of fixing people? What a contrast!

I do not know Dr. Brad from Adam, so I would not know if he is a practicing American Nazi Lawyer/Judge Mafia member or not. I use the good Doctor’s TV ad screen shot only to illustrate a point and that point is that there seems to be more money to be made as a lawyer suing people than there would be as a surgeon fixing people who are ill, or why would this good Doctor not be busy with his time fixing people doing surgeries instead of practicing law now? It was not cheap to go to Harvard Medical School!!!

Just as obvious, without huge amounts of advertising, a lot of the “big money” lawyers would be nothing today as well as a lot of people who did not know that they needed a lawyer before lawyer advertising would have never been lawyer hooked now. So may the reader, visitor of this website, decide; is America better off, or worse off, with lawyer advertising? Yep, you be the judge!

NOTE: I got the screen shot of Dr. Bradshaw off of the Internet, without his permission, and I hope that he is not offended by his own advertising shown here as an example on this Freedom of Speech website to illustrate an obvious point. Thank you good Dr. Brad.  🙂

As a matter of fact, IF THE GOOD DOCTOR AND LAWYER WERE TO HELP WITH THE LEGAL PROCESS OF HAVING MY DAD MOVED TO A VETERAN’S GRAVE SITE LIKE THE WILL AND TRUST INSTRUCTIONS STIPULATE THEN I WOULD BE MOST PLEASED TO RECEIVE HIS ASSISTANCE. Doctor, do it for a D-Day, captured behind enemy lines, POW for 10 months, WW II veteran, and for no one else including me. Do you really honor our veterans?

This evening (5-28-2020) I was thinking about the Good Doctor Bradshaw, along with two other prominent Springfield Lawyers whom I know do some significant charity work, and I wondered if Br. Brad did any charity work? As could be expected with the last name Bradshaw a Google search brings up a lot of charity programs so it was hard for me to tell which ones were the work/contributions of Dr. Brad, but I did come up with at one time Dr. Brad was a Ninja for a charity and here is a picture of that.

As I was pondering this evening (5-28-2020) I thought of a wonderful charity project that the Good Doctor could participate in, that I mentioned above, along with two other prominate Springfield Lawyers who do some significant charity wook, and that is if these three Law Offices could join hands, with me, and work for the relocation of my Dad’s, and Mom’s, remains to be transferred to that veteran’s grave site, with a monument, that my Dad paid a Mo. Licensed Lawyer, with a Mo. Licensed Law Firm, to instruct in his Will and Trust to be buried in a casket in the Springfield Veterans Cemetery. Yes I think that I will address a letter to these three Lawyers, their Law Firms, in the hopes that united we can get that done, FOR MY DAD, A D-DAY, CAPTURED BEHIND ENEMY LINES, POW FOR 10 MONTHS, WW II VETERAN, who deserved a lot better than what the Nazi Lawyers, the Nazi Trustees, and the Nazi Law Firm, did to him, stabbing him in the back, over and over, again!

So here it is again, Show and Tell, with pictures so that even a child can understand! Notice how my Dad’s signature creeps up, off of the line, indicating just how blind he was that he could NOT see the line well enough to stay on that line when signing. Again, may I ask, what kind of a low life lies and steals from a blind man? Answer: a low life American Nazi!

What Nazi Kammandant/Trustee Nancy Yendes did was violate her word and initiated a Nazi Screw You Father (and Mother), Revenge Cremation Insult with NO AUTHORITY to do so because Nazi Nancy’s Right of Sepulcher was denied by the Funeral Home because of the Will and Trust language to bury in a casket AND THEN NAZI NANCY CAME TO ME AND LIED ABOUT ALL OF THE FACTS TO ACHIEVE MY SIGNATURE ON AN AUTHORIZATION FOR CREMATION CERTIFICATE TO THEN UNETHICALLY/ILLEGALLY ACHIEVE HER NAZI REVENGE CREMATION INSULT!!! Is this not Nazism or what???

Again, Dr. Bradshaw, would you want to prove yourself a Dr. Good Lawyer and assist with the legal maneuvers to give a D-Day, captured behind enemy lines, POW for 10 months, WW II veteran, what he wanted, what he willed, what he desired, what he paid for, and was Nazi Lawyer tricked and all of that was stolen from him??? Dr. Bradshaw, do you support our troops or not??? I pray that you do and you will prove it!

In other words, does Dr. Bradshaw support Nazism or does the Good Doctor support a D-Day, captured behind enemy lines, POW for 10 months, WW II veteran?

P.S. Calling all good lawyers and good judges to help with this relocation project!!!

“The Last Lecture Series” was a program of the Mormon Church before and during 1971. It was a Program that asked the question; If you knew you were to die soon what subject would you give a lecture on as your last message to others. The link following is a link to a talk that would be similar to what I would give under these same circumstances and I think that this would be a very worthwhile message for all lawyers and judges to hear so here it is:

The link above is a resource that you can get a written transcript, down load audio and download a video, all for free, courtesy of the Mormon Church.

Here is this same talk from YouTube for your convince presented here that is as easy as pushing a red arrow button to see.

No doubt there will never be a talk or sermon like this given at the Northside Christian Church of Springfield, Mo., and would there ever be a Law School ethics lesson ever given like this either?

Of course a good way to find our way, after losing it, would be the Ten Commandments, God’s Law. And man thought that they could improve on God’s Law which obviously led to such things as abortion, etc……!

Now to the business of contacting all of the Law Schools in America to see if they give a “damn” about lawyer/judge ethics or not?

To be continued as I progress on this worthy project contacting all of the Law Schools.  🙂