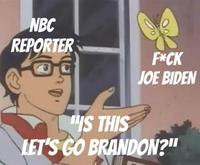 This is to good to be true how most of America has now awaken to the slimy  “Sleepy Joe” Communist Biden.

Shame on each and every one who voted for “Sleepy Joe,” and every one who participated in felony voter frauds, all contributing to the fake voter count going over the top and falsely elected the Communist Joe.

Everyone who voted for Communist Joe and Chameleon Heresy has blood on their hands because of how Communist Joe withdrew from Afghanistan leaving behind the Taliban as the best armed Muslim terrorist group in modern history.

Even Communist Joe has now experienced voter’s remorse for voting for Chameleon as his V.P.

There was NO excuse for voting for a known Communist like “Let’s go Brandon” Joe; because everyone who voted for the American Patriot President Trump knew better than to vote for a Communist!

Bro. Jim, a true American and a faithful disciple of Jesus Christ.