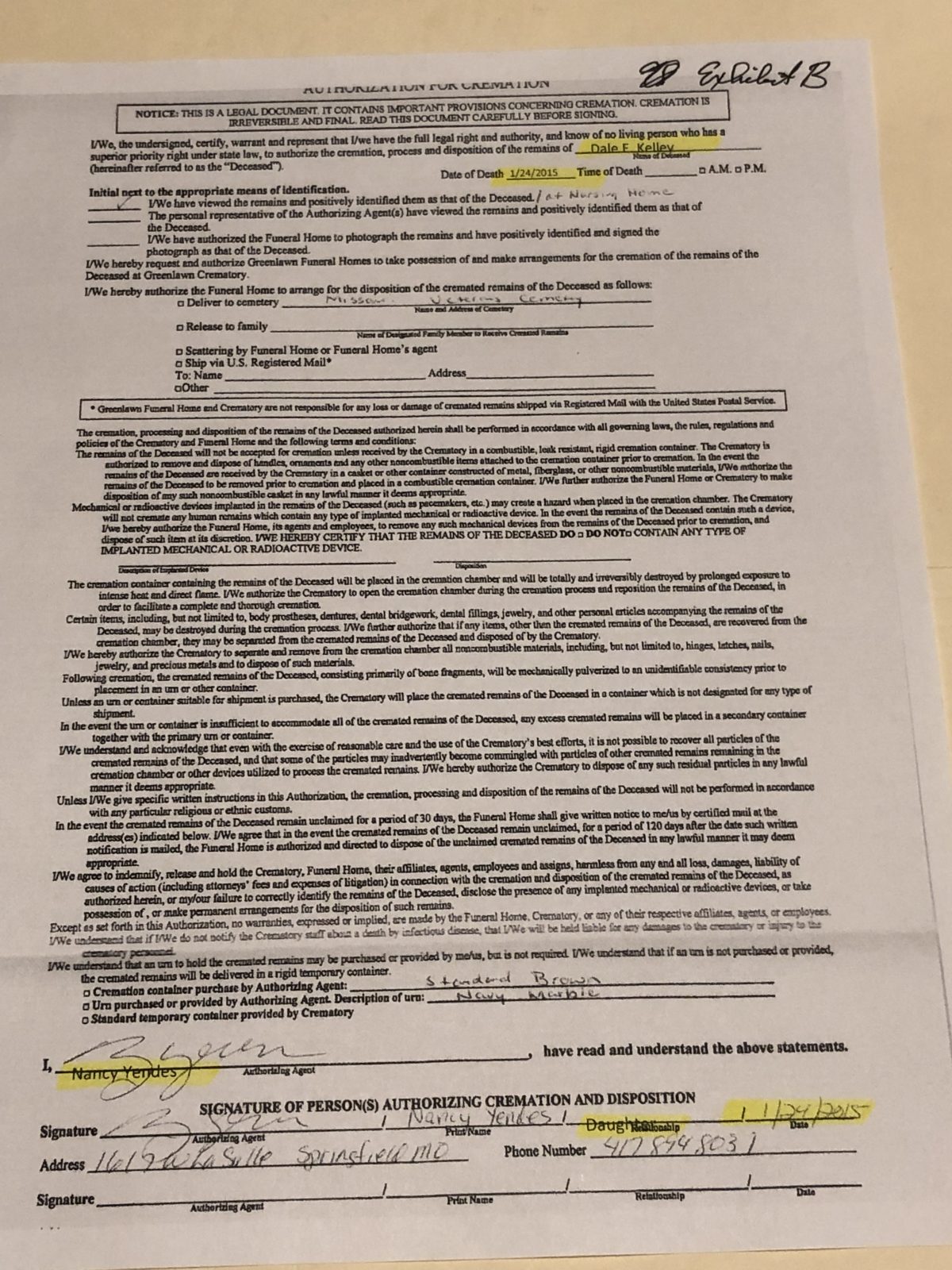 As can be plainly see this was my Exhibit B in the Probate Court and you can see the name Dale Kelley and the date of death as 1/24/2015. Dale Kelley was my Dad and the Grantor of the Will and Trust that was lawyer tricked into being a Nazi Unconditional Surrender against him.

Notice the bottom of the above photo of the Authorization For Cremation Certificate. Notice that the “relationship” is “Daughter” and there is no mention of a Right of Sepulcher. Right here is where any Right of Sepulcher should be noted as the authority to choose cremation IF THE FUNERAL HOME HONORED RIGHT OF SEPULCHER TO CREMATE!!! Apparently the Greenlawn Funeral Home in Springfield, Mo., did NOT honor Trustee Nancy’s Right of Sepulcher or it would be noted right here!!!

A lot of lawyers have the wrong impression that Right of Sepulcher gives the right in all situations and in all conditions to do with a human body anything that they would want and that is just NOT TRUE!!! Yep, some lawyers, and some judges, can be as wrong as wrong can be. Is anyone really surprised by this?

Other licensed professions, including funeral homes, are licensed and Governed by the government and their professional organizations. In the case of funeral homes pertaining to cremations in Missouri this is the Cremation Society of Missouri which has a strict Code of Ethics governing cremations. Even if a Will and Trust Trustee has Right of Sepulcher, and if the Will and Trust instructions instruct burial in a casket, the Will and Trust instructions are considered a conflict against the Right of Sepulcher and by their Code of Ethics the funeral home is forbidden to cremate. Perhaps a loophole would be if all of the next of kin would sign an Authorization For Cremation Certificate then the funeral home can be OK with cremation because there would be no one in line to sue the funeral home although the Granter is then “boned?”

Here it the “acid test” PROOF that the funeral home did not honor Trustee Nancy Yendes’ Right of Sepulcher. If the funeral home had honored Right of Sepulcher to cremate THEN THERE WOULD HAVE BEEN NO NEED FOR TRUSTEE NANCY YENDES TO COME TO ME AND LAWYER TRICK ME INTO SIGNING THE AUTHORIZATION FOR CREMATION CERTIFICATE!!! This is perhaps one reason that Trustee Nancy Yendes violated State Law, directly supervised by the “den of thieves” MANN, WALTER, DISHOP & SHERMAN Law Firm, and failed to give me a copy of the Will and Trust when my Dad was incopaciated in 2012, and in 2015, when my Dad had died; because if I had a copy of his Will and Trust instructions to be buried in a casket I sure as hell would have never followed any Nazi request to sing any Authorization For Cremation Certificate AND THESE NAZI LAWYER KNEW THAT FULL WELL!!!

Since Trustee Nancy Yendes puts most of her defense on her Right of Sepulcher I think that it would be appropriate to have an entire page on Right of Sepulcher and how this applies to the Dale Kelley Will and Trust Case. Fair enough Nancy?

I will give Trustee Nancy Yendes some voice here and I will give everyone a link to a Google search for Right of Sepulcher:

Apparently you will have to copy and paste this in your browser. If that doesn’t work just do a Google search for Right of Sepulcher.

May I interject the BOTTOM LINE here before I finish this page?

The bottom line is the Funeral Home Greenlawn of Springfield, Mo., apparently, obviously, refused to honor Trustee Nancy Yendes’ Right of Sepulcher because the Will specifically instructed that Dale Kelley was to be buried in a casket. I will present the proof of this later BUT, TRUSTEE NANCY YENDES CAN PROVIDE ME WITH THE PROOF THAT THE FUNER HOME DID ACCEPT HER RIGHT OF SEPULCHER WITH THE PAPERWORK SHOWING RIGHT OF SEPULCHER WAS THE AUTHORITY TO CREMATE!!!

How much more fair could I be on this? Just show the proof, the certificate, the Authorization For Cremation Certificate with Right of Sepulcher noted as the Authority to cremate as in direct opposition of the Will instructions.